Heavy Industry Brewing based at Henllan won the strong bitter category with its ale, 77, at the awards staged at the Great British Beer Festival in London.

Founder Tom McNeill set up the brewery in 2012 after completing a course in British Brewing Technology at Brewlab in Sunderland.

He learned he loved brewing cask ales and worked for the summer of 2009 at Purple Moose Brewery in Porthmadog. There, he learned about running a brewery.

The winning beer, 77, is an amber IPA brewed with pale and crystal malts and has a flavour of dark Seville marmalade spiked with pepper. Find out more about the brewery here.

It was a good night for Welsh brewers.

Aberdare’s Grey Trees Brewers picked up a silver in the golden ale category for Digger’s Gold.

The Great British Beer Festival is run by CAMRA, the Campaign for Real Ale.

This year’s supreme champion brewery is Bingham’s of Runscombe in Berkshire for its Vanilla Stout.

The owners of Newport’s Tiny Rebel Brewery are celebrating today after winning the title of Champion British Beer with their ale, Cwtch. 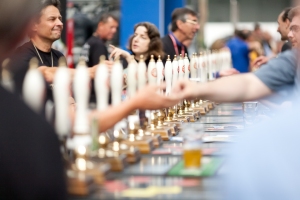 The prestigious award comes at the Great British Beer Festival in Olympia, London, run by the Campaign for Real Ale,where there are 900 real ales, ciders, perries and international beers. There are 350 British breweries featured.

The brewery describes Cwtch as  our very own untraditional Welsh Red Ale. Citrus and tropical fruit dominate the taste that is backed up with caramel malts that balance the moderate bitterness. Drinkability & balance makes this beer.”

All words copyrighted to Maria Williams, 2015. For permission to use any articles, contact me at maria-williams1967@blackberry.orange.co.uk
Loading Comments...